Chicken Little is the titular protagonist of the film of the same name. He is Buck and Chloe Cluck's son and Abby Mallard, Runt of the Litter, and Fish Out of Water's best friend.

Chicken Little is nice, good-natured, sweet, caring, funny, and pleasant. He is also quite intelligent, clever, and level-headed. However, he sometimes worries about everything and can be quite paranoid, accident-prone, and anxiety-ridden at times. His nervousness often requires assurance from friends, such as Abby. Still, Chicken Little is never really as nervous as Runt.

Due to the "sky is falling" incident, Chicken Little has been the laughing stock of Oakey Oaks and is constantly being bullied at school, specifically by Foxy Loxy and Goosey Loosey. Ever since then, Foxy and Goosey believe that everything Chicken Little does is a joke (much to his frustration).

He is determined to make his father proud, which displays his confident side. He is also quite disappointed when his father doesn't listen to or believe him.

Chicken Little is theoretical and abstract; he is interested more in ideas than social interaction.

He has the unusual ability to focus in depth to solve problems in his area of interest. He gets through life's more aggressive time through using his brains.

Chicken Little is a panicky pessimist, quick to declare a calamity based on a misconception.

He also has a brave, heroic side as when he and his friends tried to protect Earth from the aliens (only to find out later that it was all a misunderstanding). However, he does have his timid, cowardly moments.

Chicken Little is kind and supportive to the people he cares about, including Abby, Runt, Fish, and even Kirby. He is so kind that he would even go as far as to help out his own enemies, including Foxy and Goosey. Chicken little is the smartest of all of his friends. 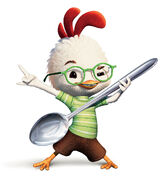 Add a photo to this gallery
Retrieved from "https://chickenlittle.fandom.com/wiki/Chicken_Little_(character)?oldid=10630"
Community content is available under CC-BY-SA unless otherwise noted.