Goosey Loosey is the secondary antagonist of Chicken Little. She is Foxy Loxy's henchwoman and best friend.

She tends to follow any order given to her by anyone (usually by Foxy, whom she is mostly associated with).

It has been hinted that Goosey is not a bad goose, but is just hanging out with the wrong crowd.

Goosey is a white goose with an orange bill and feet, a long neck, and blue eyes.

She wears a red dress with a red and white farm collar and red bowties. Goosey also wears some makeup on her eyes.

Despite the fact that she is a goose, she has fingers instead of feathers on her hands. 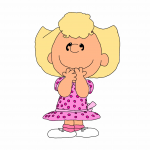